This is the first lead-in to the upcoming DC Metal Crossover Event.  It appears to be revolving around the Nth Metal(I’m not sure what it is myself, so if this is confusing, you’re not alone).  It seems pretty dark, and quite Batman-centric.

The cover just looks cool.  It reminds me of anniversary issues like #25, #50, etc from every book in the 90’s when every cover was thicker stock and shiny.  That said, it looks downright menacing.  Jim Lee, Scott Williams and Alex Sinclair made a beautiful cover.  The imposing statue of Batman in a burnt out city, the bodies tied to its legs, the dangerous looking robots with the Batman symbol gleaming from their searchlights… What’s not to love?  It looks incredibly dark, and makes one curious as to just what Batman is getting into.  This is very much a case of the cover selling the book.

The interior of the book looks great.  Given that there are three pencillers on the book the continuity of the art is excellent.  It’s clear that all three artists, Jim Lee, Andy Kubert, and John Romita Jr. made a concerted effort to mesh their styles as much as possible.  They are literally a who’s who of comic artists, and their mere presence working together on one book shows that DC is investing a lot in this crossover.  The book looks great, and at first glance I can’t tell where one artist’s work ends off and another’s begins. 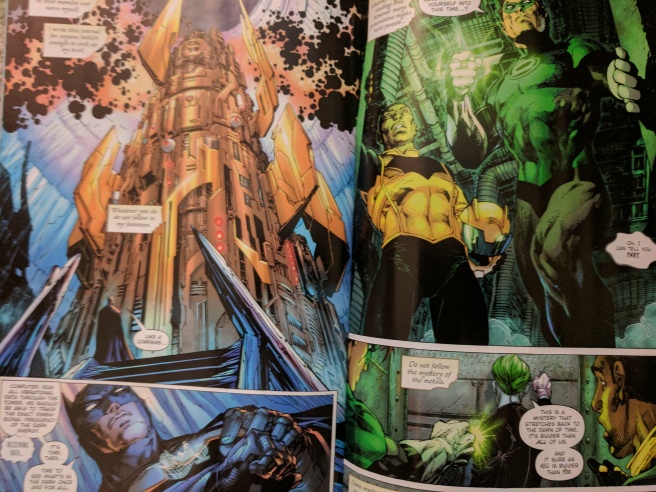 The story is narrated by Carter Hall, who is providing a running exposition throughout, hinting at a long running conspiracy yet not giving anything away.  It portrays Hawkman as an archeologist that has previously scraped the surface of the mystery that Batman is trying to get to the bottom of.  Carter is but one of the narratives, two others run throughout the book, the first being Batman’s search for the root of the mystery, and the second being Hal Jordan trying to get to the bottom of what Batman is up to.  Plain and simple, I enjoyed this book.  It’s well written, the characters come off well and none of them feel like they’re shoe-horned in, and Scott Snyder and James Tynion IV do an excellent job of deepening the mystery from all three narratives without making anything seem too contrived.  If the rest of the crossover maintains this quality it’s going to be damn good.

On another note:  I see that DC has followed Marvel and started including free digital editions with their regular paper copies.  I approve!