Ok, I actually bought this a few months ago and am only getting to reviewing it now.  But I had some really good DC titles to look at, and a course I had to complete for my job.  Time to get this one off my to do list! 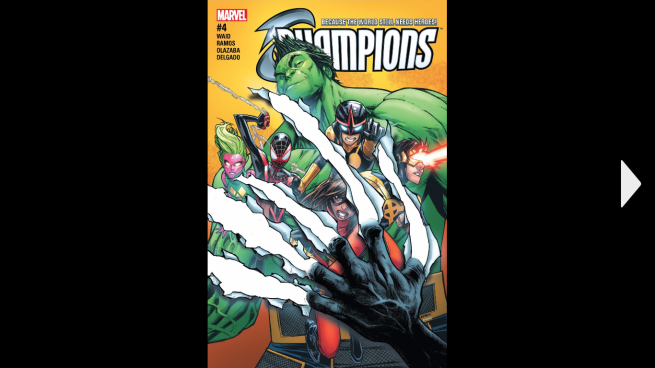 The cover looks pretty good.  It features the whole team with a hand tearing the page.  A neat effect and it looks like the issue is going to contain some action.  It also told me the heroes I’d be seeing inside.  I’ve never been a huge fan of Cyclops, but Ms. Marvel intrigued me, and my daughter was stoked to see Spider-Man.  Issue purchased.  Humberto Ramos and Edgar Delgado put together a cover that did what it’s supposed to do.  It sold the book.

Humberto Ramos does the pencils inside too.  The art is clearly aimed a younger audience, and is both clean and colourful.

The team doesn’t look overly real, but the story is still conveyed well through the art.  The personalities of the characters come through well, from the almost cocky leadership skills of Cyclops, to the insecurities of Ms. Marvel, to the stoicism of Viv Vision.  The art complements the story and the characters well

The story begins with the Champions plane going down over the ocean.  We see Ms. Marvel taking a strong leadership role right out of the gate, and get a good view of just how cocky young Cyclops is.  And no, I have no idea how a character that was in his 30’s in the 90’s is now a teenager.  It doesn’t matter.  This story made me actually like him, which is a first.  Well done Mark Waid, you actually made me like Cyclops.

Upon surviving the crash we see Cyclops quickly taking command, barking out orders like it was nothing new to him.  This creates a little bit of tension with Ms. Marvel, but both characters get past it quickly.  We then meet the issue’s true antagonists:  some Atlanteans that have set up an outpost nearby.  They quickly capture the team, who are then forced to work together to escape. 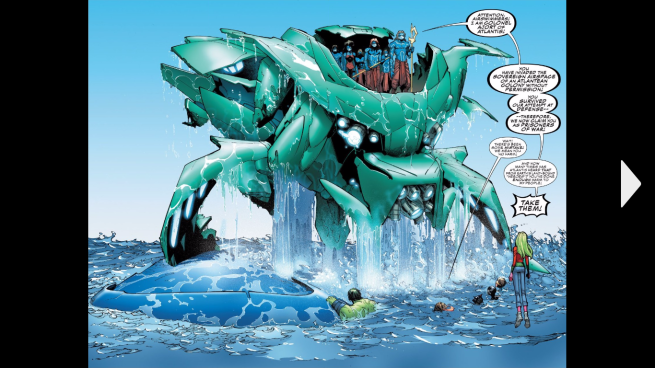 All in all this was a good issue.  Nothing groundbreaking, but it did make me actually like Cyclops, which I thought wasn’t possible.  I’ll probably pick up another issue of this series at some point.  We’ll see.