This is the first time I’ve picked up a second issue of an Image comics series, and my only complaint is that after picking up issue #1, I was unable to find issue #2.  Oh well, at least issue #3 continued to be as good as the first!

Andrea Mutti does the duties on both the cover and the interior art again in this issue, and it continues to impress.  The cover depicts an alien craft landing at the Port of Earth, a lightning strike being repelled from its shields.  The colours again are muted, and it just makes all the details of the port, the ship, and the storm stand out even more.  It’s a great piece of work.

There is a neat contrast in this issue.  One portion is dedicated to a network news interview featuring an interview with the head of the E.S.A.(Earth Security Agency), and is very light and features a lot of clean lines.  The scenes featuring the E.S.A. in action are a little grimier, and give a solid feel of being on the front lines.  The art again does a fantastic job of bringing the story to life, and sets the tone brilliantly. 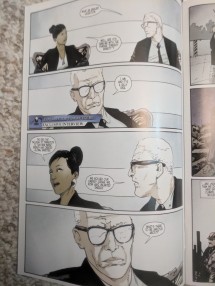 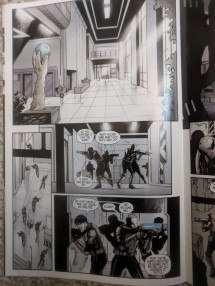 The story begins with the head of the E.S.A. being interviewed about the shift to alien provided technologies that have made the energy industry as we know it completely obsolete.  So, while the global warming crisis is effectively solved in one swift stroke, other problems are arising, namely rampant unemployment, and a transition to new technologies that is wiping out some companies and allowing others to grow at an almost absurd rate.  It’s a neat take on climate change and all of the factors that would need to be taken into account if ever we did have the ability to go carbon free overnight.  Some may consider this political or too high thinking for a comic, but I love that Kaplan has included it.  We also see that our protagonists in the E.S.A. from issue #1 have had an alien encounter, and the organization is mounting a search for the creature.  The tension is allowed to slowly build, and the issue ends on a cliff hanger, with the alien standing as a silhouette in an abandoned factory at the end.  Given that I missed the action in issue #2, I’m really curious to see how this turns out!

This is a series that if you haven’t picked up a copy of, I would recommend doing yourself a favour and grabbing it.