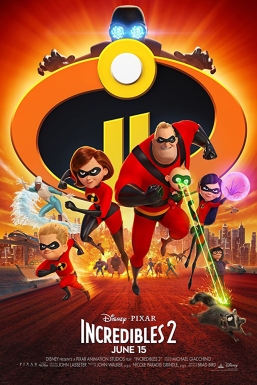 I consider myself to be in luck here, as I only watched the first film about a month ago.

The film actually begins with a short thank you message from the cast and director.  They thank everyone for their patience in waiting 14 years for the sequel, and hope you like it.  I thought it was a nice touch.

The film begins where the first ended.  With the family battling The Underminer.  It doesn’t go well, and they are all arrested.  After getting moved into a hotel a new opportunity arises.  A billionaire and his sister contact Mr Incredible, Elasti-Girl, and Frozone and make an offer.  They want to get the law making Supers illegal overturned, but first they need to change public opinion.  They decide they need to use Elasti-Girl for this purpose, as her exploits tended to cause the least collateral damage.  This puts her in the forefront, and the movie really shows what she can do as a hero, and also explores Mr. Incredible struggling with his new role of stay at home Dad.  Both of them end up succeeding, with Elasti-Girl adapting far more quickly.

The film begins to pick up speed with the appearance of a new Super-Villain, the Screenslaver.  This individual can hypnotize anyone through a screen, and speaks directly toward current societal issues with folks being addicted to their devices.  I won’t say more here because I want to avoid spoilers.

What I thought was the funniest scene of the movie involves Jack-Jack.  If you’ve seen the first film, you know that the baby has developed powers.  Lots of them.  In this scene he has outlasted his Dad in front of the TV, and is watching a show with a burglar robbing a store.  At this point he sees a raccoon digging in the garbage outside, and, seeing the raccoon’s mask, equates it with the burglar.  He then phases through the wall, and the fight is on.  This scene had me dying in laughter.

All told this movie was a lot of fun, and if you enjoyed the first one you should definitely see it.  It’s family fare, and good lighthearted fun.  The cast and crew should be proud of themselves.