The X-Men event that is titled as about to change everything continues!  In the aftermath of the last issue, Cable is dead, seemingly at the hand of his younger self.  The young Cable is also seeking to capture the time displaced original X-Men.  This story is definitely shaping up to be something special.

The cover of this issue is impressive.  It features Ahab and the five time displaced original X-Men.  The X-Men are in chains and the uniforms of the Hounds – the mutant slaves used to track and kill mutants in the future.  The art and colour are both incredibly impressive, and foreshadows a dark issue.  Mark Brooks cover is beautiful.

The art in this book is beautiful.  Pepe Larraz’s art is gorgeous, and Marte Gracia’s colour work is wonderful.  There is a lot going on in this issue, and these two go a long way toward bringing it to life.  The characters look great, and the use of darker colours in this issue help emphasize how dark of a story this actually is. 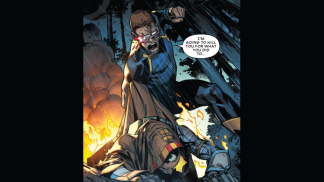 The issue begins with a meeting of all the X-Men.  They are discussing the deaths of Cable and Bloodstorm in the previous issue, as well as the threat the return of Ahab represents.  The remaining time-displaced X-Men step outside, and are soon ambushed, as both Beast and Angel are hit with tranquilizer darts.  Jean Grey and Cyclops quickly track down the source of the shots, and Cyclops discovers that Cable’s killer was… Cable.  Young Cable takes advantage of his shock and quickly flees with Angel.  The issue comes to an end when Ahab and his hounds attack the X-Mansion.  The final scene displays a new hound, which could mean we are likely to see more fatalities in the next issue. 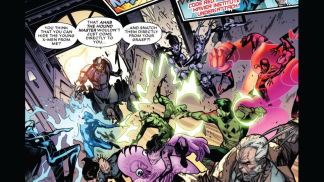