The end of the current story arc and the end of the series as a whole.  Another book I reviewed over at Impulse Gamer. 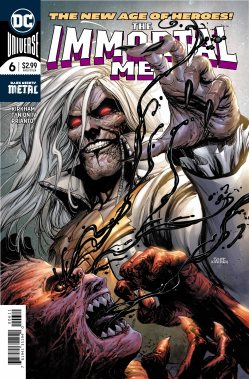 begins with the Immortal Woman seeking to start a war, and the Immortal Men being the only ones able to stop her, though the cost may be high.  I enjoyed this book.  I found it easy to get into, and enjoyed both the interior art and the cover.  As the last issue of a story line I had no idea what was going on, but the issue was well paced and easy to get into.  The only bummer with this issue is that when it ends and the Immortal Men have made themselves known to the world at large, we may not get a follow-up to the story.  Hopefully the creative team can blend them into other books, or maybe follow up with a limited series.  It’s worth a pick up.