Today was our first full day in Osaka, after having arrived via bullet train yesterday.  We got up, ate, listened to my son melt down about everything(travelling is hard when you’re five), and decided on the Aquarium today.  The Osaka Aquarium Kaiyukan is located near the harbour, and meant taking two trains from our location.

Upon arriving in the neighbourhood, the first thing the kids notice is a large lego giraffe, and then the aquarium in behind it.  It’s a neat building and reasonably priced.  We got the kids there in one piece and made our way inside.  First stop: bathrooms.  Having to stop looking at cool stuff to frantically search for a bathroom is no fun, so we went first.  Then we walked through a small tunnel that also served as a tank.  It was full of cool fish, and a couple small sharks and rays.  The kids loved it!  The lone downside of today was that several school groups were in, so it was quite crowded.  And loud.  So loud.  Kids are loud everywhere. 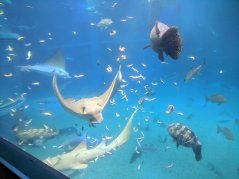 We then proceeded through the rest of the aquarium.  They have it broken up by region, so you can see penguins, seals, dolphins, and all sorts of different fish.  The main attraction however, is the central tank.  It’s multiple stories high, and is full of all sorts of rays, sharks and fish.  Some of the rays appear to be quite old and are ENORMOUS!  The prize specimens are the two Whale Sharks!  I’ve never realized just how big these fish are.  They’re awe-inspiring.  My daughter thought they were cool, but was more into the rays.  My son enjoyed looking at them, but didn’t seem to react too much.  That said, it’s important for kids to see these creatures, so they can learn just why it’s important to protect our planet.

We proceeded through the rest of the exhibits until we came to the deep-sea tank.  It was full of giant crabs.  Not your red lobster style things, but long and thick legged nightmare fuel kind of crabs.  I saw them on the Planet Earth documentary series and kind of disbelieved they were real.  Not any more.  These things literally walked out of a horror movie and into an aquarium tank. 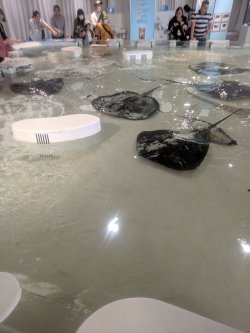 We then went to the last big attraction, and my highlight:  the shallow pool.  This pool has an open top and after washing your hands, you can reach in and touch rays and sharks.  There are specific instructions on where you can touch the animals, and my wife and I listened.  We like our fingers.  The kids would put their hands in but wouldn’t touch anything.  The rays felt slimy, which I thought was weird, and the sharks felt like sandpaper.  Most importantly to me though:  I GOT TO TOUCH A SHARK!  A REAL LIVE SHARK! I TOUCHED ONE!

After this awesome event we headed to the gift shop where my son spent his gift money on a large stuffed eel.  You can jam your whole arm down its throat.  He named it Cuddles.  My son is awesome.

After this we ate and came up with an afternoon plan.  We’d take, I mean visit Osaka Castle.  The tower costs money to get in, but the rest of the castle and grounds were free to explore.  It’s really a beautiful area, with great views of the city, and wonderful examples of what Tokugawa Japan looked like.  It’s also apparently the 150th anniversary of the Meiji Restoration. 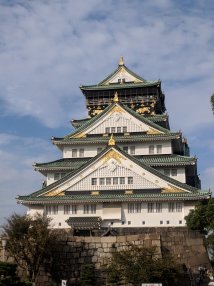 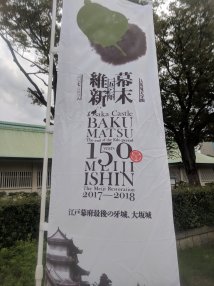 We also watched a street juggler originally from Winnipeg perform, goes by Riki.  He put on a great show and when he tried to include my son he got a death glare like no other.  So he made my boy a balloon animal to try to win him over.  After the show we hung out on the castle grounds for a while longer before heading back to our apartment.

6 thoughts on “Sharks vs Castles: Osaka For The Win!”