This is the issue that explains the ending of Extermination #5.  Ed Brisson fills in the gaps from the death of Cyclops to his reappearance at the end of the Extermination series.

Salvador Larroca and Rachelle Rosenberg handled the cover duties on this issue, and it is a pretty neat cover.  It features multiple versions of Cyclops from throughout the history of the character.  The are battling each other, each trying to climb over each other, almost as if they are trying to climb out of the underworld.  One at the top of the pile is visor-less, and his optic blasts are bursting from his eyes.  The background is a plain red field, allowing Scott to take center stage and command the attention he deserves.  I like this cover for one reason: it showcases the visual history of the character.

Carlos Gomez and Guru-eFX handle the art and colours respectively in this issue, and they do a great job.  Though this is an issue focused on Scott Summers’ resurrection, it still carries a darker tone.  This starts on page one with a focus on Scott’s grave.  It’s dark, it’s raining, and feels somber.  The grave looks spooky, and Cyclops crawling from his grave doesn’t feel like a triumphant moment.  It feels like he’s crawling from a dark place, and hasn’t shaken it off yet, and the darker tone in the art reflects that perfectly.  The issue next focuses on Cyclops saving a man from a super-villain attack years ago.  The art is done in a much older style, and the fact that Gomez matches the style of the older X-men comics from the 70’s and 80’s is really cool.  Seeing him move between two styles effortlessly was fantastic! 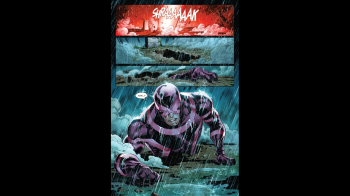 Ed Brisson shows us in this issue how Cyclops returned from the dead.  It begins with him crawling from his grave, confused as to how this is possible.  The issue next moves to Cyclops saving a scientist named Paul Douek.  This is important, because he ties into Scott’s resurrection, at the direction of Kid Cable.  The issue fills in the gaps between when Scott died to when he reappeared at the end of Extermination.  It’s ending occurs during the final conflict of the Disassembled story-line, where Cable offers Scott a choice.  Essentially testing him to see which Scott had come back, the Mutant martyr, or the hero.

The book also does a good job of fleshing out Kid Cable a lot more.  In Extermination he was a cold blooded and efficient man of action.  Here he is a lost boy who misses his father.  Given that Cyclops is now older than him, we may get to see more of this dynamic that was absent under the older Cable.

I enjoyed this issue, and while it felt rushed at times, I thought it did a great job fleshing out how Cyclops had returned and what he’d been up to in the meantime.  If you’re a fan of the character, this issue is a must have!