This is the first issue in the latest solo series for Ms. Marvel.  I’ve been a fan of this character since I picked up my first issue of Champions, but have never grabbed a solo of hers.  I got a recommendation at my local shop and grabbed this one.

The cover features a determined looking Ms. Marvel on the back of a train.  She looks focused and ready for action!  The cover is dynamic and well coloured, I quite enjoy it!  Eduard Petrovich has done a great job with this one!

There’s a whole team on this one!  Minkyu Jung on Pencils, Juan Vlasco on inks, and Ian Herring on Colours.  Everything is well drawn and detailed in this book, the pencils and ink work are top-notch.  To me however, where this book all comes together is with the colours.  Every scene where Kamala appears in costume she stands out.  The colours in her costume are the most vibrant, and I think it’s great to have the reader’s eyes drawn to the protagonist on every page.  It looks great!  Another scene that is just really well done is when she is being confronted by her family when they reveal they know she is Ms. Marvel.  The emotion on the characters faces as they argue is great, and the colouring of two panels after Kamala is asked who she has become are excellent.  A darker close up on her face in the first, and a lighter one in the second when she declares herself a hero.

Saladin Ahmed has taken over the writing duties on Ms. Marvel for this re-launch, and 1 issue in I enjoy how he’s captured the character.  He doesn’t just provide a fluff ball issue either.  The scenes with Kamala and her family carry real weight, and show a character that has grown in ability and confidence, yet still feels hurt her family want her to quit. 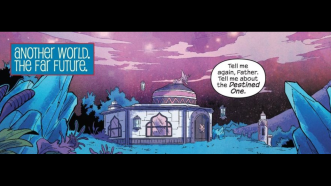 There are also a few god fight scenes, and some teases for where this series is potentially heading in the future.  That said, this issue is a good starting point, and is well worth reading!