It’s been a while since I reviewed a comic, so, let’s get back at it! 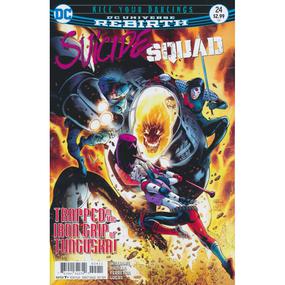 This issue has a pretty sweet looking cover.  Featuring Harley Quinn, Katana, and Captain Boomerang fighting a very Holocaust(anyone remember Apocalypse’s son from the 90’s Age of Apocalypse storyline) looking villain.  It portrays a lot of action, and promises plenty inside.  The cover was done by Eddy Barrows, Eber Ferreira, and Adriano Lucas.  It looks cool, and is the reason I picked the issue up of the shelf in the first place.

Augustin Padilla and Juan Ferreyra do the interior art, and you can tell they each did about half the book.  The first half is very gritty and dark, whereas the second half is a lot brighter.  I’m not sure why two different artists are needed, it’s not like there was a major tonal shift in the issue either that required it, although I like how Harley Quinn’s insanity seems to shine through in her facial expressions in the back half.  The book looks good, and compliments the story.

This is the fourth chapter of a five-part story, and appears to be the part where the shit hits the fan.  It appears that Amanda Waller has been compromised and is about to set in motion a plan to get rid of all Meta-Humans.  Of course it wouldn’t be a DC comic without the obligatory Batman appearance.  But the Suicide Squad, while villains, seem to deep down relish their role as anti-heroes.  The only really disappointing part of the issue is that the big scary looking villain on the cover only shows up on one page.  It drives me nuts when comics do this.  But hey, the issue focuses on Katana and Harley Quinn, and both characters shine, each in their own way.  I was really unsure what was going on in the story, but overall enjoyed it nonetheless.