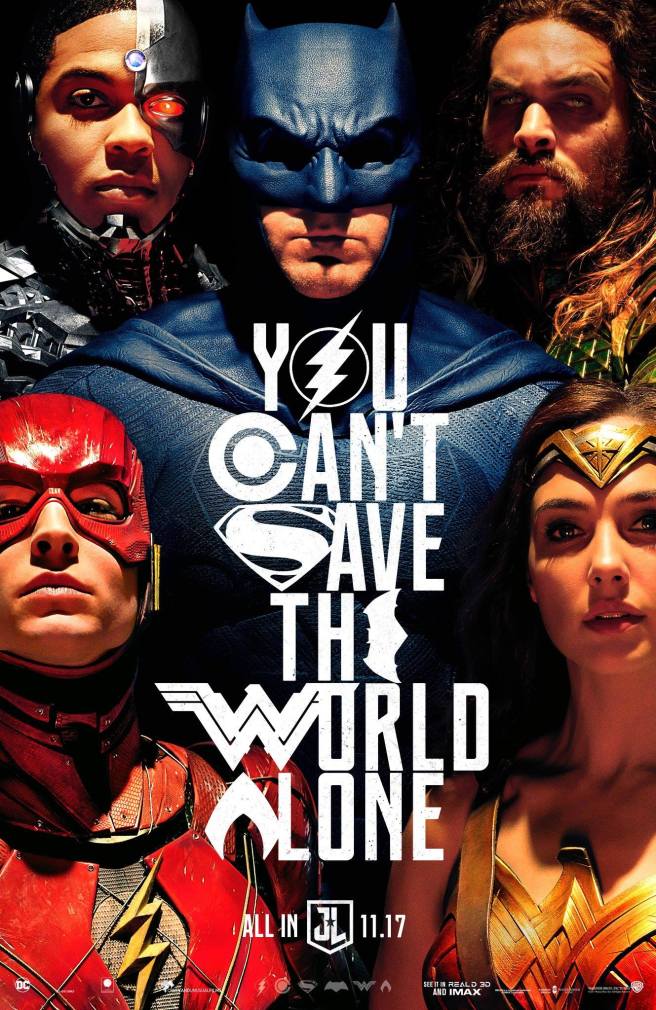 I took in Justice League tonight.  After some of the reviews and criticisms of the film, I was expecting it to be pretty terrible, but still vowed to approach it with an open mind.  There are several things I liked in it, and a few I didn’t.  It was really a mixed bag of a film, and had a major tonal shift towards the end.  This coincided with when it was at its strongest.

I’ll start with what I disliked.

The villain.  Having only really started following DC comics in the past year, I was unfamiliar with Steppenwolf(not the band).  He’s essentially a big ugly guy intent on destroying the world so he can become a god.  He’s all CGI, and while he looks better than the villains from Suicide Squad, I think practical effects may have served better here.

The dark tone.  The first half of the movie was very dark.  All the sets seemed gritty and dirty, it was always cloudy, night, or in a basement.  Even the final battle seemed unnecessarily dark.  This movie could’ve used a little more colour.  It’s the Justice League!  It’s about hope!  Lighten it up a bit!

The story.  It felt a little disjointed and rushed.  Given the issues with Snyder leaving before the film was completed I had a feeling this could have happened, but it did feel like two separate movies pasted together.

Now, what I liked!

The League!  I enjoyed each of the characters.  Ezra Miller is great as the Flash.  He plays him as very green and unsure of himself, but is by far the most hopeful character in the film.  Jason Momoa as Aquaman.  He’s just badass.  I’ve always kind of been unimpressed with Aquaman, but not this version.  He’s tough, he’s surly, and jaded.  He is very much a product of two worlds and a member of neither.  You could also tell Momoa was enjoying the hell out of himself playing this character.  I can’t believe I’m saying this, but I can’t wait to see the Aquaman solo film!  Ray Fisher as Cyborg.  Another character well done.  Fisher plays Cyborg as a machine learning to become human again, and I really liked the portrayal.  He also looked really good, definitely a match for the comics.

Ben Affleck as Batman.  Say what you want, I like Affleck in this role.  He’s a good actor, and plays both the Bruce Wayne and Batman persona well.  Gal Gadot as Wonder Woman.  Another strong performance in what is currently DC’s strongest film property.  She stands as the second strongest member of the league, and spends most of the film running a tutorial on how to kick ass.  Finally, Henry Cavill as Superman.  I think this is his strongest portrayal of Superman yet, especially in the finale of the film.  It’s nice to see Superman smiling and hopeful and completely in control for a change.

The finale.  I won’t spoil it, but when the whole league finally comes together and is actively working as a team, they work well together.  The actors have good chemistry with each other, and the way they worked together to deal with Steppenwolf worked.  Each character’s strengths were played to, and they all played a role.

While this movie wasn’t as good as Wonder Woman, and isn’t living up to expectations, it isn’t a bad film.  It’s another step in the right direction, but not quite where it needed to be.  It’s light years better than Suicide Squad, and felt like a more complete film than Batman v Superman.  They have Superman finally heading in the right direction, and did a good job establishing Aquaman, Cyborg and The Flash.  It’s not an Oscar contender by any means, but was a fun popcorn flick.  I just hope DC can lighten up some of their future films, because this one was at it’s strongest when it wasn’t taking itself too seriously.

One thought on “Justice League in Review”