So I picked up this Christmas themed issue on a whim.  It’s a neat looking book with a warm story.  Grant Morrison and Dan Mora put together a fun and festive story!

The cover features a heavily armed Santa Klaus carrying an axe and a shield, backed by a fierce-looking snowman.  In the background is a dangerous looking giant snake.  The cover doesn’t feel too Christmas-y other than the snowman.  The snake looks fierce and dangerous.  It’s an interesting cover and it caught my eye quickly.

Dan Mora drew this book and it has a great look to it.  The book is well detailed, and I loved the portrayal of Santa.  Despite being involved in some pitched fight scenes, and some tough moments, Klaus always seems to have kindness in his eyes.  The fact that this is expressed so well in the art is impressive.  The art is both fierce and heartwarming, and I loved that it could swing back and forth between eliciting these two emotional responses. 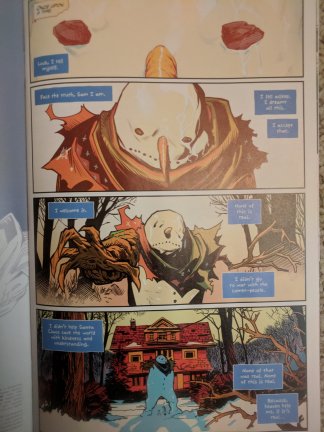 This is a fun and heartwarming story written by Grant Morrison.  It’s a great take on Santa Klaus, and I loved the tie in to Norse Mythology.

The story begins with Klaus repairing a snowman.  He puts eyes on him, puts him back together, and begins telling him a story of how he found him as the snowman starts to come alive.  We learn the snowman is named Sam, and he spends the issue trying to pull his memory together.

The driving point of the plot is that aliens from the edge of the solar system are coming to Earth.  They had been once before, and were the end of the Norse gods in the great battle of Ragnarok.  While there is more to this than it seems on the surface, the battle is pitched, and many of Klaus’ allies fall.

In the end Sam comes up with a brilliant solution, after a dip in a methane lake on Titan(yes, Saturn’s moon).  I won’t spoil it here, but I loved the twist, and I thought the big finale was very much in keeping with the spirit of the holidays.

If you can still find this book go pick it up!  My local shop sold out on day 1!

One thought on “Klaus and the Crying Snowman #1”